Nestled in Neerim North about 40km from Warragul, Victoria, you’ll find the Lockett family. Their 90-hectare dairy farm was constructed around 100 years ago by Gordie Lockett’s Grandfather. Now with the addition of two Lely milking robots, it looks set to remain a family tradition.
“I’m the 3rd generation and my boys here are the 4th generation on the same farm”, explains Gordie. “It’s a pretty reliable area to farm in. If it doesn’t rain for 3 weeks we think we’re in a drought. It’s always looked after us here.”

While Gordie continues to run a 50 stand rotary on what they call the ‘home farm’, his son Ben now manages what was their old Herringbone dairy which they converted to house two Lely A4 robots to milk 130 cows.

Most impressively, they found a way to introduce robotics with very little infrastructure change. No new sheds or buildings were required, they kept the same paddocks and laneways, and they’ve seen great success with a simple, two-way grazing system.

We sat down with Gordie and Ben to ask them about their experience.

What changes did you make to get the farm robot-ready?

“We only A&B graze, so we basically left the system, the yards and everything as they were. The whole farm has two central laneways, separate lanes, and where they meet is about 20 metres from the shed. So we only had to divide the laneway about 20 metres to almost get the farm in half. So that was all we did.

“With two-way grazing you basically run it the same way as a conventional farm because you still have your day paddocks and night paddocks. The gates change at midday and midnight, they spend 12 hours in a paddock. 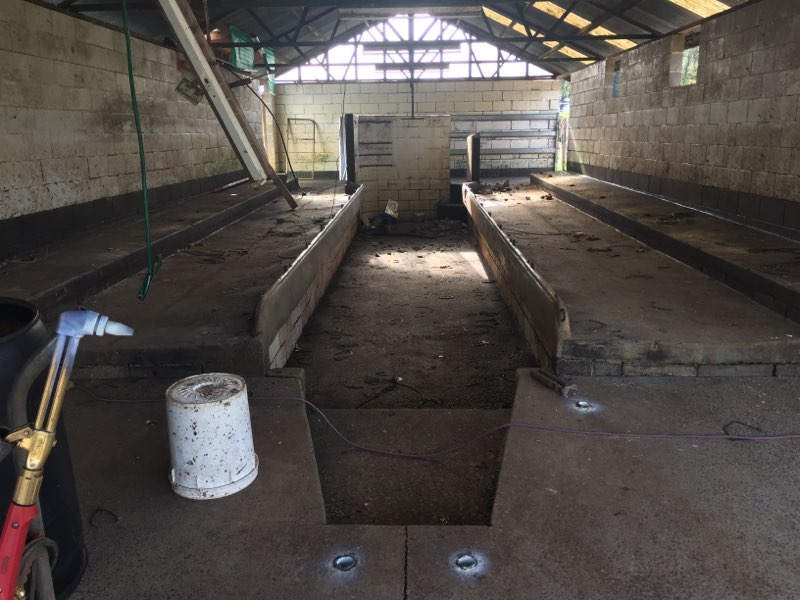 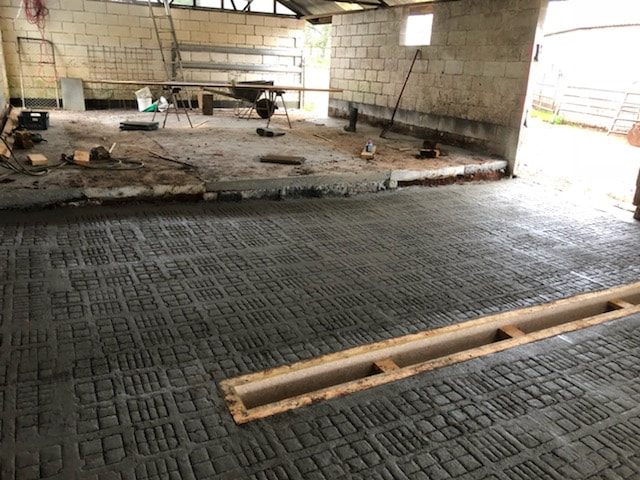 How did you get the cows used to the robots?

“It probably took two weeks for them to walk into the robots voluntarily. They get grain in the robot. But to get them from the paddock to the shed voluntarily, for a couple of months I was getting up during the night to round 30 or so in, to teach them to spread themselves over 24 hours. But one morning I slept through my alarm and only woke up around 7am and when I went out to the paddock there was only about 20 (of 130) left in there. They’d worked it out themselves.”

How have your milk volumes changed since using the robots?

“Average milkings (per cow per day) at the moment is 2.1, but it has been as high as 2.3 or 2.4 when most of the cows are fresh and the weather is good. We reckon it’s roughly a 10% increase in production across the board.

“They’re not pedigree cows, just your run of the mill mix of Jerseys and Holsteins and Jersey Holstein cross, and they're actually averaging just as much or not much below Dad’s (Gordie’s) cows at the home farm, which are full Holstein cows.

“We had a big cow on the rotary, she actually struggled to fit, and she’d only ever do around 32-33 litres. We took her over to the robots, she just fit there too, but she was constantly doing 36-38 litres there. And once they’re on second lactation on the robots they do more again because they know the system. That cow got up to 50 litres this lactation. She did 15-18 litres more per day than she did the previous lactation. She spent about a week doing 50 a day on the robots.

“The only thing we could think of is, she comes to the robots pretty much every 12 hours. Whereas when they get milked traditionally, it might be 10 hours from morning to night milking, and 14 hours from night to morning. Maybe getting rid of that milk when they want to makes a difference.”

Have you noticed a difference in cow behaviour?

“The cows seem to be a lot quieter. We’ve had cows in the rotary who are stroppy or violent in the rotary, and we’ve sent them over to the robots thinking if they kick the robot at least it won't break someone’s arm. The only other option was to sell them. But within a few days they just walk into the robot, get milked, they don't move. Within a few weeks you can nearly walk up to them in the yard. I don’t know if it’s less human contact, but they definitely seem to be more quiet.” 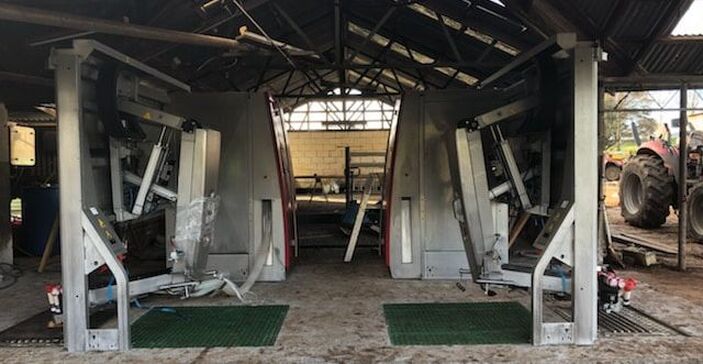 The Locketts' robot set-up, just after installation.
What other results have surprised you?

“We set up the automatic draft when they're on heat, and since we did that I reckon the conception rate has gone up as well, because cows are getting artificially inseminated at the right time. The Lely collars are picking up when the cow is on heat - their rumination, activity, milk production - all of that factors into whether the cow is on heat or not. The robots never sleep so they see everything.”

How much time do you all spend in the dairy now?

“I could do it all on my own now with the robots, but I’m also teaching my younger brother how to run it for when I have holidays or Mum and Dad have holidays. So it’s just me and him running it, he works Monday to Friday and I do Monday to Sunday.

“With the robots, we all play footy and cricket and if you had to be home by 4:30pm to milk we wouldn’t be able to do that. We finish cricket at 5pm, get home by 6pm, and out of 130 cows maybe 100 of them have been milked by the robots already while you’ve been playing cricket. You round the last cows in, feed the calves, you might be there 45 minutes and then you’re done for the day. The work life balance is a lot better with the robots.

“I worked out that I do roughly 30 hours a week with the robots. Then I work about 30 hours at the home farm for Dad (Gordie). But if we were just in a conventional setup, I wouldn’t be able to work for Dad at all because I’d spend so much time in the shed physically milking. The robots give you the opportunity to outsource your labor and go do something else. There’s jobs here that are finally getting done that have been on the to do list for about 10 years!”

Have you seen any financial benefits to the robots yet?

“Well my nephew was share farming over at the herringbone. When he left that tipped us in the direction of the robots. So that labour is saved. We also do hay contracting and that’s another advantage of the robots, we don’t have to take people off the harvest crew to milk. It’s certainly saved us one labour unit. We bought our robots second hand so I reckon in four years they will pay for themselves.

“When we built the rotary 17 years ago, the initial cost was $650,000. These days there'd be no change out of a million dollars to do what we’ve done there, and two people still need to be there milking twice a day. I could get six brand new robots for a comparable cost and all we’d have to do is pull the rotary out and do some re-concreting. The yards, the sheds and everything else would just kick along as normal. There’s not a lot of other costs or infrastructure to get these things to work. 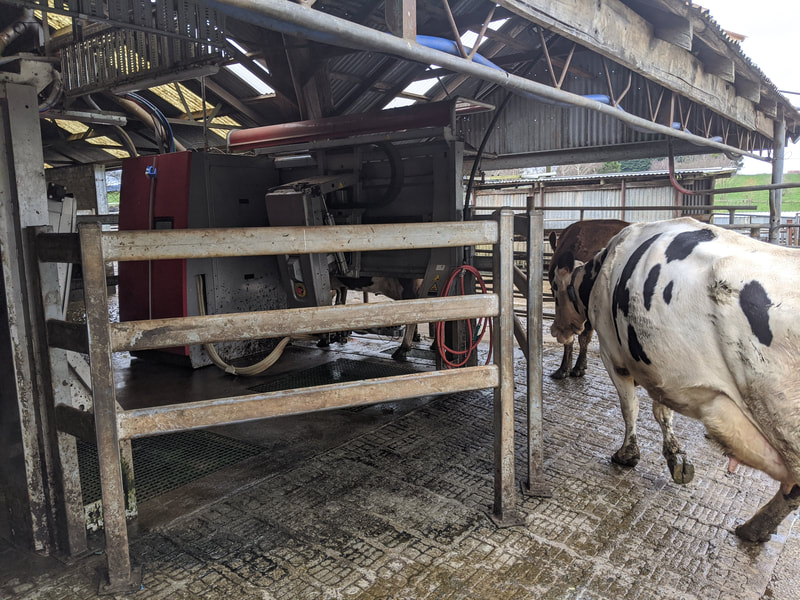 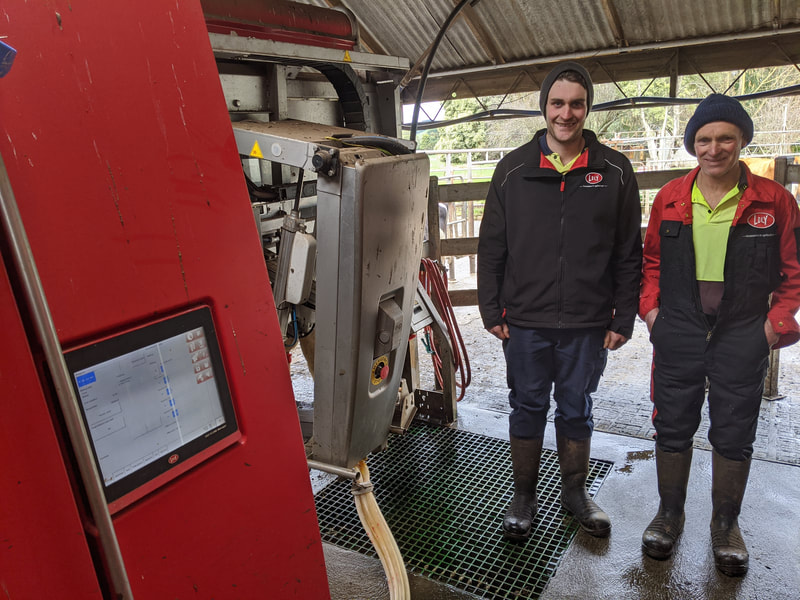 Why did you choose Lely robots?

“I’ve dealt with Greg Cole (Managing Director of Lely Center Gippsland) for a long time. He did all the electrical work for the rotary nearly 20 years ago. And all of the robots around Gippsland we saw were Lely. It says a lot about the reliability and longevity of them if the very early robots are still going, they must be doing something right.

“Also with the Lely Center in Warragul, Gippsland, you know full well that you've got great support so it takes that edge out of thinking ‘What if something goes wrong, how long will it take to fix?’ These people are literally a phone call away. That really makes a difference.

“If you’ve got a good system, it takes a lot of those concerns away. The boys have us on a pretty strict service regime. We rarely have any sort of major dramas, just your normal wear and tear of things like strings and air seals, which happens anyway.”

Do you have any advice for someone considering robots?

“They should go out and look at different robot farms to see what would suit their farm best. You’ve got other Lely robot dairy farmers locally who use three-way grazing, I think one even tried four-way grazing, just to keep life interesting! Then there’s our place where it's simple two-way grazing and they can see how robots can fit into a ready-made infrastructure.

“Ask a farmer if you’re able to shadow them for a week to get a feel for how it runs. We've had heaps of people come and look at ours. And there's a few who have gone home and thought about it and realised two-way grazing would work on their farm and it’s really changed their mindset on it.”
Lely robot farmers are excelling on pasture across Gippsland
View more customer stories